This is my IELTS writing task 1, can you guys please check it for a while cuz I’m not adept at this task. Thanks for reading 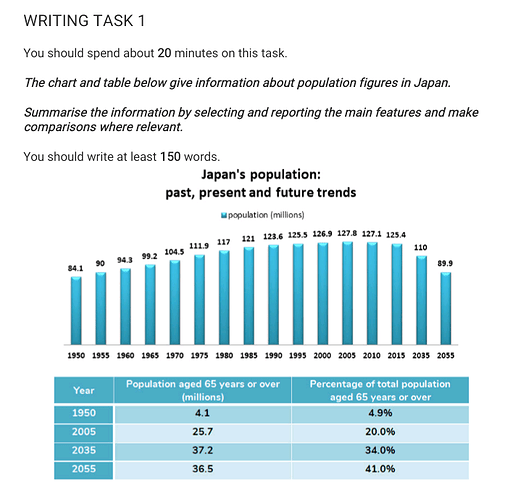 The bar chart illustrates the quantity of Japanese inhabitants in 35 years while the table below analyzes the number of over 65-year-old adults and their rate compared to total in four marks of years.

In summary, Japan’s population steadily went up from 1950 to early 2010s but fall then until predictable years later whilst the amount of elders whose ages are over 65 jumped up for a great deal.

During the first 35-year period, the figure had a propensity to a progressive growth from 84.1 millions to 36.9 millions more in 1985. Nevertheless, the next 20 years did not witness any sizable movement that all the 5-year gaps are estimated at about 1 million people. Then the number was prone to be more minimal and forecasted to see a huge drop in future.

2005 saw a surge of the population aged over 65 years since 1950 and this item’s trend is calculated to rise in a few decades. For all prediction of the population’s faint decrease at 2055, the proportion of these citizens keeps soaring, then reaches its peak at nearly a half of whole at the aforementioned year.